Beautifully evolved aromas of honey, candied lemon, ripe apricots and a hint of wood smoke, whilst on the palate, lustrous layers unfold onto a textural palate lifted by Chenin’s characteristic lively acid backbone’ 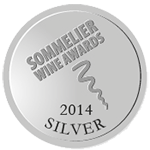