"Generally, I think we’re going to have to get used to the idea of spending more when we eat out – the combination of lockdown and Brexit means that everything from producing the food to distributing it has increased costs for everyone, and there’s a limit to how much the industry can absorb them." 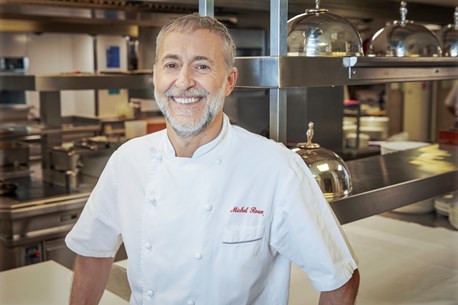 Just before Christmas, we had been talking to Michel Roux Jr of Le Gavroche about the hospitality industry and the possible future. Here is a snapshot of our discussion.

Lunch at Le Gavroche is an institution so the fact you’ve not been able to open for lunch is a big deal, do you see this changing anytime soon?

I hope so. The past year has taken such a toll on the hospitality industry and across the board, we’re all struggling with staffing issues. It’s something we’re constantly reviewing and as soon as we’re able to, Le Gavroche will open again for lunch but I don’t know when that will be at the moment. Sooner rather than later, hopefully. I’d love to see our guests back for lunch again, and I know they’re desperate to come back.

Tell us about Tables for Heroes and why that was so important to you?

Tables for Heroes was my way of saying thank you to the incredible people that went above and beyond during the pandemic. Back in April, I asked friends, family, and colleagues of all deserving pandemic heroes to nominate them for a chance to have dinner for two people on the house at Le Gavroche. It was open to anyone that had contributed in some way to the community during the pandemic – from firemen and food store employees to teachers, volunteers, charity workers, carers, soldiers, the list goes on. Our front-line workers were, and still are, amazing, but I also wanted to acknowledge the actions of anyone who had done their bit to make a difference to someone else over the past year. We received so many nominations, and they were all very moving. I made 25 tables available, one for every Saturday until the end of the year, for a four-course meal with drinks as my guests. I wish I could reward everyone who deserves our thanks, but this seemed a nice way to do something small for people who have done so much.

What is your vision for post-Covid hospitality world?  Will it ever go back to how it was before, or what will it need to look like to thrive once again?

I think there really needs to be large-scale investment in hospitality, making the industry attractive for young people to come into and telling them that hospitality is a “proper” career. Better training and better infrastructure are paramount, especially for an industry that is such a huge part of the economy. The government really needs to look at what they’re doing to entice people into the industry in the long-term, and in the short-term, ensure the right support is given so that we can survive. Too many restaurants have gone under, and more will follow unless something is done. Generally, I think we’re going to have to get used to the idea of spending more when we eat out – the combination of lockdown and Brexit means that everything from producing the food to distributing it has increased costs for everyone, and there’s a limit to how much the industry can absorb them. One thing the pandemic did was force hospitality operators to look at opening other areas of the business – our wonderful guests were so keen to support us, so we opened the Le Gavroche e-shop to offer a slice of Le Gavroche at home and were taken aback by how popular it was. So much so, it’s now become a permanent feature!